ERROR: Content Element with uid "5595" and type "gridelements_pi1" has no rendering definition!

How heavy are neutrinos? The Karlsruhe tritium neutrino experiment KATRIN was designed to answer this important question of modern particle physics and cosmology. It was started after 15 years of construction at the Karlsruhe Institute of Technology (KIT) on 11 June 2018. The SFB1258 is involved in the international research network by Susanne Mertens, research group leader at the Max Planck Institute for Physics (MPP) and professor for dark matter at the TUM. 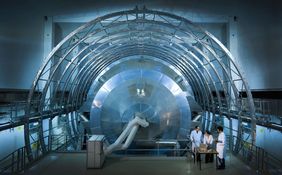 Looking into the large spectrometer of KATRIN: The measurement of the energy of electrons from the decay of tritium will provide information on the mass of neutrinos. (Photo: KIT)

For around two decades, it has been known that neutrinos possess an at-rest mass – in contrast to previous assumptions. However, no one can say how much the neutrino actually weighs. That should change with KATRIN.

"Many of the threads of modern physics come together in the neutrino," says Susanne Mertens from the Max Planck Institute for Physics. "Its properties help us to better understand how our world is built – from the smallest building blocks in particle physics to the large-scale structures in space." Together with two other scientists, Mertens coordinates the work of the international analysis team in the KATRIN experiment.

Scientists also associate the “super” particle with the hope of encountering hitherto unknown physics, that is, phenomena that cannot be explained by the long-established Standard Model of particle physics.

The starting point for determining the mass of the neutrino is tritium – a radioactive, heavy variant of hydrogen. The decay of tritium nuclei produces one electron and one neutrino. They share the decay energy of 18,591 electron volts (eV).

This energy is randomly distributed across both particles. "However, we know from Einstein's famous formula, E = mc², that the neutrino, which is not directly observable during decay, must at least retain its at-rest mass – and that mass is then missing from the electron," explains Mertens.

It is precisely this tiny deficiency of no more than 2 eV, corresponding to the unimaginably low mass of 3.6 x 10-37kilograms, that the KATRIN researchers are tracking down with their neutrino scales. They are seeking to measure the maximum energy that the electrons achieve in the beta decay of tritium. To put it simply: if this is subtracted from the decay energy one arrives at the neutrino mass.

Analysis of many billions of decays

One electron and one neutrino are created per decay. However, only around one electron per second is relevant to determining the neutrino mass. The scientists will analyze the energy of several billion neutrinos over a period of three years.

The tritium source consists of a 16-meter-long cryostat which, like all other source components, is set up in the Tritium Laboratory Karlsruhe (TLK). The electrons from the source are steered by strong magnets to the heart of KATRIN, the giant electrostatic spectrometer. It was delivered in 2006, in a <link http: www.katrin.kit.edu internen link im aktuellen>sensational journey from the manufacturer in Bavaria, by ship via the Danube, the Mediterranean and then upriver to KIT.

After many years of planning, setting up and commissioning the major components of the 70-meter-long experimental setup, almost 200 members of the international KATRIN collaboration, from 20 institutions in seven countries, are looking forward to the measurements starting in June 2018.

ERROR: Content Element with uid "5478" and type "gridelements_pi1" has no rendering definition!

ERROR: Content Element with uid "5479" and type "gridelements_pi1" has no rendering definition!